The Swinging Sixties? Yes indeed – but let’s start with the 1860s!

Allow us to show you round two neighbouring homes, one belonging to Queen Victoria’s reclusive Poet Laureate Alfred Lord Tennyson and the other, to the Indian-born and partially Indian-blooded pioneer portrait photographer Julia Margaret Cameron. 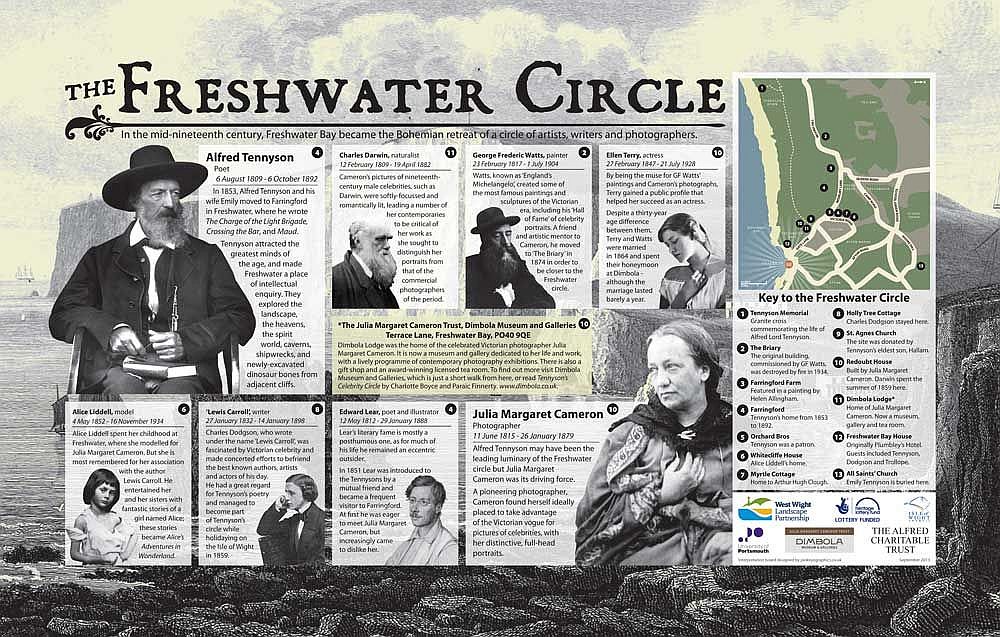 Further properties occupied by other prominent members of their Freshwater Circle are dotted round the village. The superstars and celebrities of their day, find out why the world sought out England’s most renowned poet while often trying to give the famous photographer the slip!

We start with a guided visit round Dimbola, Julia’s former home – now a Museum and Galleries with part-permanent and part-changing exhibitions. In the Julia galleries, discover how much suffering was routinely required in the name of art! This charming old place still bears the appearance of quirkiness and eccentricity which is quite worthy of her!

Maybe you are more of a fan of the 1960s than of a hundred years ago? Well don’t forget - the world returned to Freshwater in 1970! Follow this amazing and engaging story in words, photographs and posters in Dimbola’s 1970 IOW Festival Gallery (which includes some material relating to the earlier Festivals).

No doubt you will stand in the garden next to the Jimi Hendrix statue for the inevitable photo! Allow your gaze to follow his – dreamily sweeping across the hallowed fields where he headlined the world’s largest ever outdoor music festival 3 weeks before his untimely death.

By now you need a breather and have earned a delicious afternoon tea in Dimbola’s wonderful tearoom. This was Julia’s salon and where movers and shakers of Victorian society were once wont to linger. Now you will find it well-stocked with sumptuous home-baked goodies.
Weather permitting, you may like to sit out on their sunny terrace, keeping Jimi company and continuing to admire stunning sea views, still casting the odd glance in the direction of those fields of fame….

Suitably refreshed, we will move on up the road to Farringford, the Tennyson family home for around 40 years. This has recently been authentically and magnificently restored to its former glory inside and out. You can’t fail to be blown away by its loveliness and minute attention to detail. As a staff member recently commented, ‘you feel as though Tennyson has just left the room and will return any second’.

The audio guide is second-to-none, and you will be given a brief tour of the exterior at the start or end of your visit. This includes the enthralling Victorian garden – designed and lovingly tended by real experts. 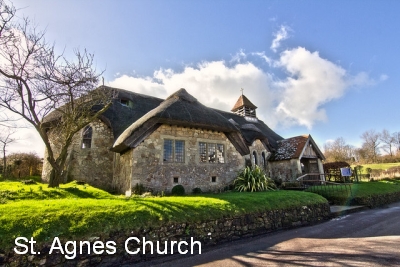 Also take a peep inside the quaint St. Agnes Church – one of the country’s mere handful of thatched churches, snugly nestling opposite what was once the workplace of Queen Victoria (now the Piano Café). This is close to Orchards, the delightful village stores where they still have records of Tennyson’s daily purchases! 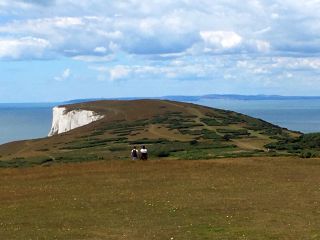 If you have time to spare and want to blow away some cobwebs and maybe glimpse some wildlife, we can take a climb up Tennyson Down with its awe-inspiring views of both The Solent AND The English Channel. Not for nothing did these views inspire so many of his world-famous lines.

Tennyson himself, who walked up here twice daily, declared that the air here was ‘worth sixpence a pint’!